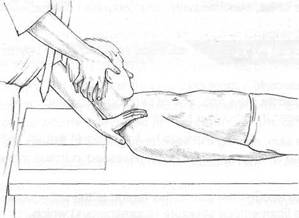 Fig. 4.26   Assessment of levator scapula shortness involves taking the neck into full flexion and side-bending rotation, away from the tested side, while maintaining firm shoulder pressure on the tested side to prevent this from elevating. Discomfort reported at the upper medial border of the scapula or the upper cervical spine suggests shortness in this muscle, as does nature of the resistance noted during performance of the assessment.

Fig. 5.1A   Schematic representation of cranial motion. During flexion, the occiput is thought to move antero superior, which causes the sphenoid to rise at its synchondrosis. Simultaneous movement occurs in the frontal, facial and nasal bones as indicated. The extension phase of this motion involves a return to a neutral position.

Fig. 5.1 В   The flexion phase of cranial motion (inhalation phase) causes the skull, as a whole, to widen and flatten.

Fig. 5.2   Schematic representation of the synchrony of motion between the sacrum and the occiput.

Fig. 5.3   Palpation for the synchrony of motion between the sacrum and the occiput.

Fig. 5.5   Smith’s palpation exercise to assess the interface between the physical and the ‘energetic’structures of the arm.

Fig. 5.6 Low back palpation. Hands under sacrum and low back apply no pressure – contact only. Forearm resting on edge of table acts as Becker’s fulcrum. Increased pressure downwards at the fulcrum enhances palpator’s awareness of tissue status.

Fig. 5.7   Palpation of sacrum and pelvis. Becker’s fulcrum points are the right elbow on table and contacts on anterior iliac spines with left hand/arm.

Fig. 5.9   Palpation of cervical spine. Becker’s fulcrums are forearm contacts on the table.

Special Topic Fig. 6B   Upledger’s skill training exercise for assessment of dural restrictions. This utilises polyethylene cling film (to represent the dura) and a ‘restricting’object (to represent adhesion or restriction in the dural sheath). By standing at the feet (or by using the sacrum) or the head, restrictions can be assessed via gentle and highly focused traction.

Fig. 6.1   The slump test position stretches the entire neural network from pons to feet. Note the direction of stretch of the dura mater and nerve roots. As the leg comes from position A to position B, the movement of the tibial nerve in relation to the tibia and femur is indicated by arrows. No neural movement occurs behind the knee or at levels C6, T6 or L4 (‘tension’ points).

‘ease’ and ‘bind’ are assessed by the ‘listening’ hand on

the spinal tissues during functional evaluation of spinal

Translation to each side

Translation forward and back

Translation up and down (traction and compression).

Special Topic Fig. 8C   This figure illustrates the ‘convex-concave rule’ in which a mobile bone moves on a fixed structure. In the left hand example the joint surface is concave (as would be the case in the tibia, ulna or a phalangeal joint). If the mobile bone was restricted in an upward direction (striped arrow) the direction in which a gliding mobilisation would be made during treatment would also be in an upward direction (as indicated by the two large arrows).

In the right hand example there is a mobile bone associated with a convex surface (as in the head of the humerus, the femur or the talus). If this were restricted in an upward direction (striped arrow)the direction in which a gliding mobilisation would be made in treatment would be in a downward direction (large arrows).

Special Topic Fig. 8D   Schematic representation of a range of motion indicating normal restriction barriers (anatomical and physiological) as well as a pathological barrier and a position of maximal ease. The quality of the ‘end-feel’ of each of these positions will vary markedly.

Fig. 8.1   Standing flexion test for iliosacral dysfunction. The restricted side is the one on which the thumb moves during flexion.

F’iff. 9.3   Operate/ adopts apos/fro/7 offering a birds-eye view of ASIS prominences on which

Fig. 8.4A   The ASISs are level and there is no rotational dysfunction involving the iliosacral joints.

Fig. 8.4B   The right ASIS is higher than the left ASIS. If a thumb ‘travelled’ on the right side during the standing flexion test this would represent a posterior right iliosacral rotation dysfunction. If a thumb ‘travelled’ on the left side during the test this would represent an anterior left iliosacral rotation dysfunction.

Fig. 8.4C   The ASISs are equidistant from the umbilicus and the midline, and there is no iliosacral flare dysfunction.

Fig. 8.5   Palpation of retrofiexion (extension) of the thoracic spine.

Fig. 8.6   Palpation of gapping of spinous processes during flexion.

Fig. 8.7   The patient is side-bent (towards the right in this instance) over the palpating thumb which assesses the nature of the ‘end-feel’. A sense of unusual ‘bind’ might indicate a restriction.

Special Topic Fig. 9A   Distal phalanx position held as vertical to the palpated surface as possible, as described by Abrams, for percussion (‘orthopercussion’) assessment.

Special Topic Fig. 9B   A finger which is to be used as a pleximeter should have the distal phalanx slightly raised (upper finger) and not resting along its length on the palpated surface (lower finger) [after Abrams]. The arrow represents the ideal point which should be struck for optimal percussion efficiency.

Fig. 9.1   Palpation of the liver (after Barral and Mercier) in which frontal, saggital and transverse planes of motion are sequentially assessed.

Special Topic Fig. 10B   Taking the pulse in TCM. One finger at a time would apply suitable degrees of pressure to make an assessment, superficially or at depth.

Fig. 10.1   Bring hands as close together as you can without the palms touching each other. Then bring hands apart about 5 cm. Return hands siowiy

to original position. Repeat, and on each repetition separate the palms by an

additional 5 cm, until they are finally 20 cm apart.

Fig. 10.2 When the hands are about 20 cm apart, slowly bring them together. Every 5 cm, test the field between your hands for a sense of bounciness or elasticity.

Fig. 11.2   The hand positions which would be used in Ford’s treatment of horizontal ‘cross-restrictions’ – (A) pelvic, (B) diaphragmatic, (C) thoracic outlet and (D) base of skull. By ‘projecting’ his sense of touch he palpates for ‘depth, direction and duration’in order to treat these dysfunctions.